Although I was born in Batu Gajah, about a half hour’s drive from Ipoh, the capital city of modern Perak, my knowledge of the State has mainly been gleaned from The Malayan Trilogy, written by the renowned English novelist Anthony Burgess (who once taught at the Malay College in Kuala Kangsar, a boarding school in Perak for the Malay elites – dubbed the Eton of the East) and more recently through Tash Aw’s award winning book Harmony Silk Factory, a novel set in Perak during the tin rush. So I was very excited to join the Museum Volunteer Field trip to Ipoh on May 30th Thursday to discover if its way of life is still intact.

Coming along on my balik kampong trip, were 22 other museum volunteers, 9 Malaysian Culture Group members and 5 Jabatan Muzium Malaysia (JMM) staff.  We left the museum car park at around 6am in JMM’s spanking new bus which made the four hour trip passing through the beautiful limestone hills in the Kinta Valley extremely comfortable.

According to history, Ipoh came into existence in the 1820s as a small Malay village of Palau along the banks of Kinta River. The tin rush of the 1880’s resulted in a boom and increased Ipoh’s population to about 4,000 people. A devastating fire in 1892 damaged the town but gave the British, who ruled Perak, the opportunity to rebuild the streets in a more orderly way.  Broad, straight roads were built in the town, flanked by rows of shops and majestic buildings. 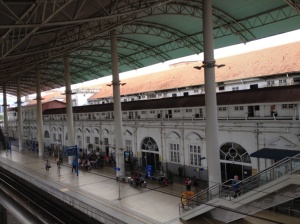 This was certainly evident in the first building we visited – the glorious white neoclassical Ipoh Railway Station, often referred to as the ‘Taj Mahal’ of Ipoh because of its beautiful domes and high arches. Built between 1914 and 19187 by the famed British architect A.B. Hubback who also designed the Kuala Lumpur Railway station, it replaced the original railway station which was an attap roofed shack.

Our next stop was the newly renovated Station Square in front of the Railway Station where our guide, Mr Raja, explained to us the significance of the War memorial which rather touchingly commemorates Perak’s war dead and bears the words: “Sacred to the memory of the men from the state of Perak who fell in the Great War 1914 -1918 and to those who died in 1939-1945 War.”

Across the road we found ourselves at the regal Town Hall and old Post Office. Completed in 1916, these buildings served as a post and telegraph office as well as the police headquarters. In 1945 the Malay Nationalist Party, the first political party formed in Malaya, held its inaugural congress here. It is still in use for weddings and other events. 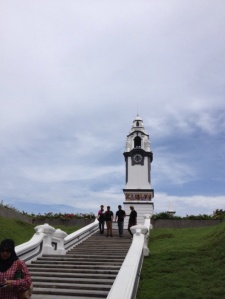 A few streets behind the Town Hall and Post office we viewed the four-sided Birch Memorial clock tower which was built in 1909 to honour J.W.W. Birch, the first resident of Perak in 1875. For a small structure it has many details: the tower bells that used to strike the chimes of Big Ben in London, four terracotta figures perched at the top of the tower which represented the four virtues of British administration namely loyalty, justice, patience and fortitude and a panel portraying 44 famous figures from world history across the tower. Interestingly the form of Prophet Mohammad was painted out of the panel in the 1990s in keeping with the Muslims objection to the depiction of the prophet. The bust of Birch was also missing. Stolen perhaps?

On the way to lunch at a delicious mamak restaurant, we passed many other striking buildings in old Ipoh, particularly the beautifully maintained Hong Kong and Shanghai Bank building which look as impressive now as it did in the 1930s.  In contrast, many of the buildings in Ipoh are near decay although their classical architectural design still imbue them with a sense of quiet elegance and dignity. 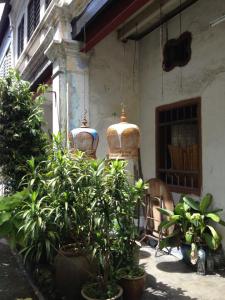 Thankfully, we could see evidence of an initiative to revive old Ipoh especially along Panglima Lane (Concubine Lane) which dates back to the turn of the century. At that time, this area was known for opium, gambling and brothels. Now, new boutique hotels such as the Sekeping Kong Heng as well as eclectic restaurants such as Burps and Giggles are giving visitors a slice of history within an old town which is still alive and working.

We also visited two museums and the tin dredge at Tanjung Tualang.  Stay tuned to part 2 for a description of our memorable visit to these places.

Part 2 can be viewed here. 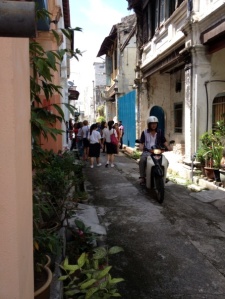 One thought on “Field Trip to Ipoh (part 1)”