Last June on the 25th, Dr. Ernesto Gonzalez Licon gave a talk at Muzium Negara on the architectural and cultural development in ancient Mexico. Although it was at the height of the haze with the air quality index deemed ‘very unhealthy’, there was a good turnout and the participants listened eagerly as Dr Licon discussed the various Mesoamerican civilizations starting from the Olmec to the Teotihuacan, Zapotec, Mayan and Aztec untill the conquest of Mexico by the Spaniards in 1521.

We were presented with many interesting facts. Being an impossible to reform chocoholic, I was especially fascinated by the ancient Mexican love for chocolate.  The Olmecs were the first people to process cacao beans with the earliest evidence coming from residue left in a bowl that dates to 1800 BCE.  The Mayans and Aztecs considered chocolate as the food of the gods, a heavenly concept that I can identify with.

The Mixtec tribe which inhabited Mitla in Oaxaca, Mexico from circa 900 CE, wrote their history as phonetic pictures on deerskin.  The picture on the left (blurry, I know.  I am still working on my photographic skills), shows a royal wedding ceremony taking place on the day 13 Snake of the year 13 Reed which works out in our uninspired calendar as 1051 CE. Lots more information can be gleaned from the drawing including that the cup of chocolate held by the happy lady represents dowry.  Not surprising as cacao, which was made into a drink, was an item of luxury. 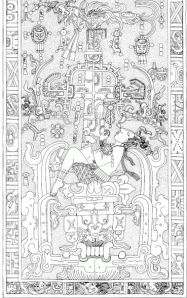 As an impressionable teenager hooked on the writings of Erich von Daniken, I read in the ‘Chariots of the Gods’ that the picture on the right, drawn by ancient Mayans, represents an astronaut sitting in his rocket with the markings at the bottom depicting flames and gases from the propulsion unit.  Dr Licon had the more logical explanation.  The drawing is actually the sarcophagus lid of Pakal, one of the kings of Palenque which is a city in Southern Mexico and it depicts Pakal descending into the Mayan underworld.  Dr Licon pointed out the main imagery on the drawing to us.  This includes a snake located under Pakal having its mouth open and it represents the entrance to the underworld.  The ceiba tree represents the connection between the great sky, the upper-world and the underworld.

Pakal was buried wearing a jade mask and beads.  The jade was mined from Guatemala which is one of the few worldwide sources of jadeite.  Jadeite was a luxury item and played an important role in the lives of the Olmecs, Mayans and Aztecs.

A description of ancient Mexico is not complete without a mention of its pyramids. Unlike the Egyptian pyramids which were burial tombs, the Mayan pyramids were mostly built in honour of their gods and had temples at the top of the pyramids.  Pyramids, such as the famous Chichen-Itza pyramid located at Yucatan, Mexico, also served as astronomical observatories. Complicated through it may be, the Mayan calendar is extremely accurate with precise calculation of astronomical events including eclipses.

The floor had lots of questions.  A number of these questions centered around some of the similarities between the ancient Mexican civilisations and the Southeast Asian civilisations.  Dr Licon explained that the perceived similarities was because all agricultural societies had to know the planting seasons and hence had to develop some level of astronomical knowledge.  All cultures faced the same elements including the moon, sun and wind resulting in similar traditions. Karen wanted to know more on blood sacrifice among the ancient Mexicans.  Human sacrifice and blood letting was mostly practiced by the Aztecs.  According to their cosmology, the first four cycles of human creation were destroyed by the gods.  In the fifth cycle, i.e the Aztecs, the gods sacrificed one of themselves to create the humans.  So blood giving was a way of saying thank-you.

Dr Licon being presented with books on Malaysian history and archaeology at the end of the talk.

One thought on “Mesoameric Civilization”