Railway development in Malaya differed from that in many other colonies in that it came before the road network. In other colonies, railways followed rough tracks, but Malaya’s tropical jungle was not routinely traversed, as Malays had traditionally found waterways adequate for their transport needs, and the few tracks that existed were often ill-defined. 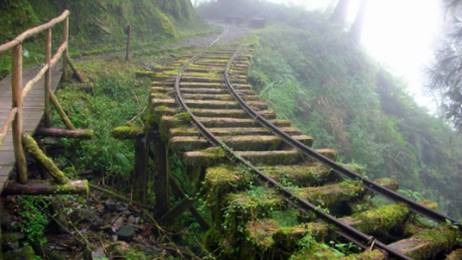 railways in Malaya was not a simple task. Whilst the British planned a substantial network, the jungle was often unexplored and was often a major barrier to travel. Significant difficulties were frequently encountered during surveying, constructing and subsequently in maintaining the railway system.

Sultan Abu Bakar of Johor had noted railway lines during a visit to England in 1866, and decided to build a line from Johor Baru to Gunung Pulai, where a sanatorium was planned to be built in the cool hill resort. Johor had a plentiful supply of good quality teak, which was used for the six by four inches rails that sat on round sleepers embedded in the earth; (at that time, stone ballast was considered to be unaffordable). The agreed gauge was one metre, which followed the convention for similar railway lines in India. Construction commenced in 1869, and ten miles were in use by 1875. However, the wooden rails and sleepers fell into disrepair, and by 1889, was reported to have been abandoned  after a locomotive had fallen into a hole because white ants had eaten the track.

The first successful railway line was constructed from Port Weld to Taiping, and was completed in 1885. Surveyors planned the lines through the virgin jungle to be as straight as practicable. Porters carried all food and supplies for the survey party, who could often only progress at a crawl. The majority of the vast amount of material required to construct the railway line was imported from Britain. The construction party had to follow stakes previously laid out by the surveyors, and substantial roads had to be built to carry the required heavy construction equipment. The roads were continually under threat from torrential rain and vast quantities of ballast were needed to cross unavoidable swamps. A swathe of 100 ft. was cleared on both sides of the track to keep the jungle at bay. The majority of the trees felled were of hard wood varieties, and almost all of the timber was recycled for use either in constructing the line, or stockpiled for subsequent use as fuel for the locomotives (wood eventually became in short supply, which resulted in some trains being converted to run either on newly discovered coal or on  oil). The ground was often saturated and embankments were built with effective drainage to safeguard against subsidence. Lallang grass with fibrous roots was planted to bind the unstable earth. 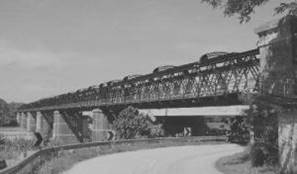 Many rivers had to be crossed, and the bridges were often of a standardised design of 100 ft. length which could be extended in 50 ft. stages. Forty nine such bridges were required between Johor Baru and Seremban, of which nineteen exceeded 100 ft. Victoria Bridge in Karai, Perak is the oldest FMS Railway bridge. The structure passes over Sungai Perak and was completed in 1900; it closed to rail traffic in 2002. The bridge is over one thousand feet long, and rests on six brick piers. At the time, it was the most advanced bridge in the Far East.

The formation of the Federated Malay States in 1896 led to centralised power. Sir Frank Swettenham, the newly appointed Resident General, proposed plans to develop the FMS and Province Wellesley railway networks. Three phases were envisaged, a northward line to connect Selangor with Perak, an extension to Kuala Lipis in Pahang, and a southward line to Sungei Ujong, the whole linking Port Dickson to Prai. The British Colonial Office approved the plan which would support economic diversification and link the FMS with the Straits Settlements. Construction began in 1897 and was completed within six years. Whilst the new railway lines opened up new areas for development, they only served narrow corridors, and it was apparent that a complimentary road network was also required.

In 1909, the FMS Railway General Manager wrote to the Federal Secretary with recommendations relating to tenders for the building of Kuala Lumpur Railway Station. The lowest tender was from Kee Sen, ($157,000), which was not recommended as the schedule had not been completed. The second tender was from Messrs J. A. and P.C. Russell, ($ 159.289.36),  which was not recommended as P.C. Russell was considered to be too young and to possess insufficient experience.

In August, the Resident General wrote to the High Commissioner and dismissed the tender from Kee Sen as being “only a lump sum suggested by a friend”. With regards to the submission by J. A. and P. C. Russell, significant misgivings were expressed as to whether the younger brother had sufficient knowledge and experience to complete a contract of such importance and magnitude. Ang Seng was acknowledged as being a contractor who had successfully completed previous work for the FMS railway and could be relied upon to carry out the present contract. The Resident General then recommended that the contract be awarded to J. A. and P. C. Russell. 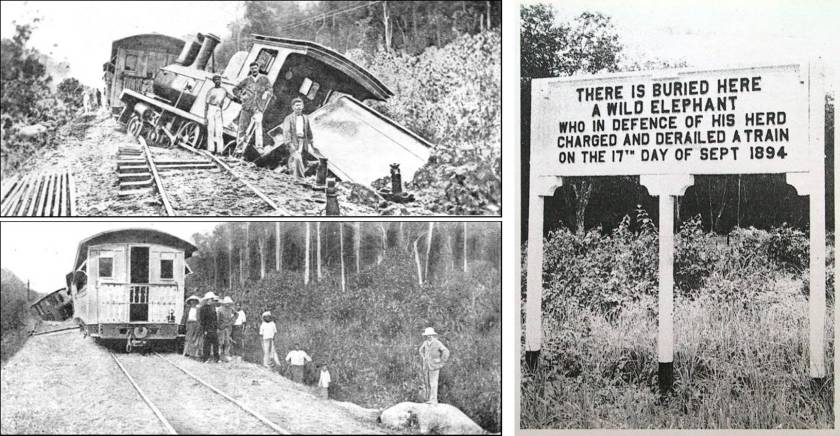 In 1894, a train was derailed by an Elephant at Teluk Intan, and the story put around at the time was that this was in retaliation for the train killing her calf. Tigers used to be numerous around Bukit Intan, and a number were shot during the building of the railway line. After the Station was completed, a tigress and two cubs wandered onto the platform. They rested for a short time under the window of the Booking Office before getting up and wandering back into the jungle.

Part 2 of this article can be viewed here.