by Maharani Halid and Shirley Yee

Jugra…..was once the center of the Selangor State Kingdom….it was her 2nd capital…Sultan Abdul Samad resided here till his death in 1898 with his palace, Jugra Palace, built on top of Jugra Hill.  It was also where the 5th Sultan, Sultan Sulaiman, had his coronation.

Our journey to Jugra started at 8 am with our coach captain, Pak Man, accompanying 27 museum volunteers and 1 JMM representative. The journey took about an hour’s drive. Since our coach captain was not familiar with the route…our rescuer, Mr Edmund, gave a hand and we managed to reach the first destination in our itinerary, Muzium Insitu Jugra. Insitu is translated as “terletak” in Malay which means to “stay foot” or “on site” or rather “where it begins”.

Upon reaching our destination, we were amazed to see the museum deep in a remote area. We were greeted by Encik Aidy, Puan Farahani and Puan Zita; Encik Aidy became our official guide for the whole tour.

Museum Insitu Jugra was formerly the Balai Polis (Police Station) built in 1876 by Captain Syers, during the British era. Its construction is said to have been initiated by Tunku Kudin, Sultan Abdul Samad’s son-in-law. During WW2, the building incurred some damages due to bombings but it managed to survive. It was consider the first police station in Selangor before the police station moved to Bukit Aman.

The museum’s ruins were found during the excavation by the Selangor archaeology team in 2001 and it was opened to the public in 2013, costing more than 1 million RM wholly funded by the State Government. The museum was built using granite said to be found around the area.  Glasses were installed on the upper level to reduce the humid conditions in the building and to maintain the conservation works. Original parts of the building can still be seen especially the granite walls, the flooring, 2 pillars left unsealed and the jail house previously used to accommodate 4 to 6 prisoners at any one time during the era. The museum has 3 galleries with Gallery A being the main gallery showcasing Kuala Langat’s history.

Before moving on to our next destination, we were entertained with the “huuu haa” story by Encik Aidy. This relates the story of a mystical iron chest that once belonged to Sultan Abdul Samad. It is better known as the Iron Chest of Istana Jugra. The chest was used to keep Sultan Abdul Samad’s coins and other valuable items.  It was said that Sultan Abdul Samad would toss a handful coins daily from his favorite window to the ground for the children to pick these up in the hope of encouraging them to study harder. After his death, the chest was left in the ruins of the Istana Jugra which now sits on privately owned land. In the 1960s, Museum Negara wanted to move the iron chest to Muzium Negara for safe keeping. Despite warnings from the locals, Muzium Negara managed to move the iron chest and this was the start of the nightmare.  At nights, strange creepy sounds could be heard coming from the chest and when it was finally opened, it was found to be empty. After many strange happenings, the mystical iron chest was returned to Jugra and is now under the care of one of Sultan Abdul Samad’s descendants, Raja Kassim, but the mystery continues……

Next in the list was Masjid Sultan Sulaiman or Masjid Bandar, known for its yellow or rather mustard colour. But unfortunately for us, the Masjid is currently closed for restoration. This Masjid was built in 1905 by Sultan Sulaiman, the fifth Sultan of Selangor.

The mosque is within a 5 min drive from his Istana, Istana Bandar, built in 1905 with new wings added in 1914. The building was designed by the Sultan and he lived here till his death in 1938. The design of this Istana is said to be inspired by the Sultan Abdul Samad building in Kuala Lumpur. The construction cost was wholly funded by the Sultan. The architecture/layout of the building has Chinese, European and Mughal influences. The Balairong, the court house, the kitchen, and the rooms are still intact.

The 8th Sultan of Selangor, Sultan Salahuddin Hishamuddin, was born at this istana and grew up here. In those days, the royal ladies and children were not allowed out of the compound. They were limited within the garden known as “Taman Larangan” guarded by the panglima or Istana guards. 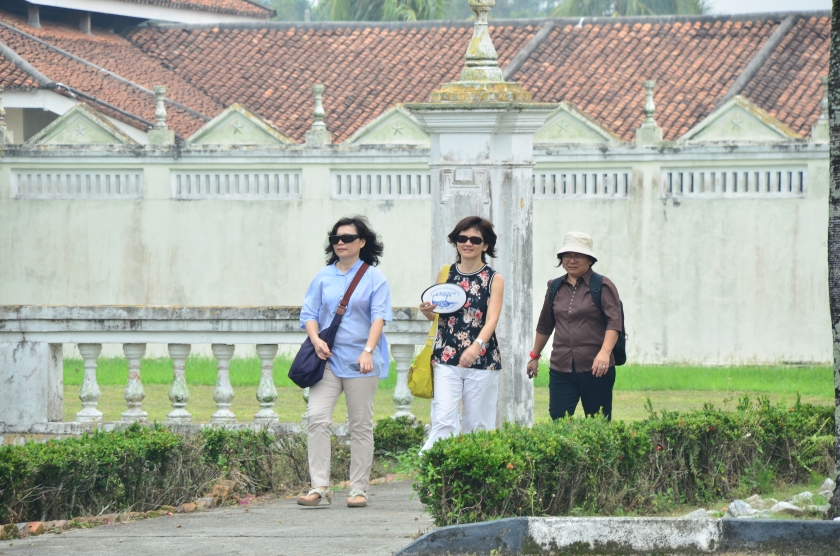 Sultan Sulaiman was known to his subjects as being a pious Sultan. A penalty of 50 cents (the value was big back in the 1900s) was imposed on those who failed to attend the Friday prayer. The Sultan also read the sermon and became the Imam during the prayers. Istana Bandar is currently being restored by Jabatan Warisan under the supervision of Puan Zita.

Before the tour of the Istana, the Museum volunteers were served an excellent lunch in the Istana’s compound enjoying the air (forgetting the haze at that moment!) and the quiet surrounding. Just imagine back then during the era of Sultan Sulaiman, this area was heavily guarded to ensure the safety of the royal family members.

Before heading back to Kuala Lumpur, we stopped over at Ros Kerepek to buy ourselves some goodies. The group safely reached Museum Negara 4.15pm and it was a successful and fruitful tour, another discovery…..