Bright and early on Saturday 18th June, forty of us set off for a mini adventure in and around Ipoh. The temperature in the morning was perfect for scaling limestone hills and standing outside; not too hot and not too cold and defiantly not raining! It looked like it could be a perfect day. 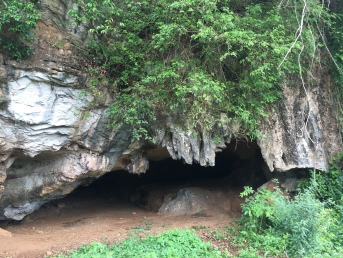 We began with a tour of Gua Tambun, looking at how Prehistoric man lived. Very quickly, we found evidence of one of their meals, clearly there were no bins around at the time. Many small shells were just thrown onto the floor with the ends snapped off so they could suck the juicy morsel out from within. We explored caves on the lower levels of the limestone hill – the only evidence of ancient man was his food remains. But then they had lived here nearly 9,000 years ago – what did we expect to find? 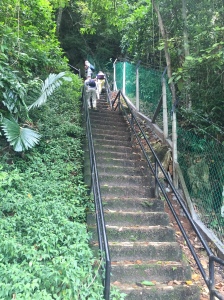 We tracked Neolithic man’s movements and worked our way up the limestone hill. It seems that for some reason, and they don’t know precisely why yet, man moved up the hill and started living higher. We climbed the 130+ steps up to see the evidence left from 4,000 years ago. Of course, we knew this would be cave art, we’d read Elizabeth’s emails!

I, for one, eagerly looked around, hmm… some modern graffiti, some bird nests, some overhanging rocks. Where’s the rock art?! It was only when we were split into teams and given a little treasure hunt, looking for the rock art, that we found our first piece of art – after that the wall came alive; shapes, swirls, arrows, dancing people (anthropomorphs), animals (zoomophs). Over 600 to be seen. Sadly, most of the teams only managed to identify about 10-15 of the 50 or so art pieces we’d been asked to find, although in our defence, some of the paintings had faded and it’s not as easy as we made it look, standing there with one’s head tilted right back! 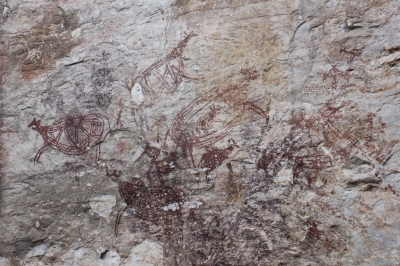 These paintings were made in the most gorgeous reds and purples, from crushed up hematite mixed with resin, spit, urine or animal fat as a binder. These, we were told by our archaeologist and his student who is studying the paintings, are the only Neolithic red paintings to survive in modern Peninsula Malaysia.

To end our visit at the rock art, we all had the opportunity to create some rock art of our own using hematite and a modern form of binder (which was a relief, I didn’t fancy using spit or urine!!) and a small disk of plaster that had also been prepared earlier. Most of us tried to re-create the cave art we could see, but one or two more adventurous painters painted rather beautiful landscapes! Pre-historic man would have been very impressed; I know I was!

After this we gathered up our cars and travelled in convoy to Ipoh. Having parked and got our instructions, we were free to roam the area known as Concubine Alley and have a tasty lunch. The specialty was bean sprouts cooked in soy sauce! Yummy. 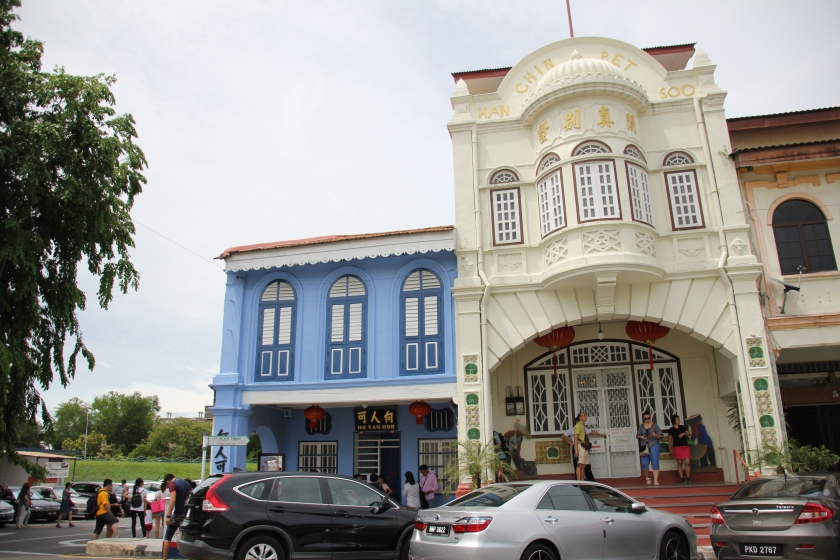 At 2 pm prompt, we started our tour of the Han Chin Pet Soo museum. Han Chin Pet Soo, translated, means: Entertainment & Leisure Villa. It was a club for the very rich Hakka Chinese tin miners – it was invite only and no wives allowed (we found out why later…..!) The club was set up on 5th May 1893 and the building was donated by Towkay Leong Fee, a very rich tin mine owner.

Leong Fee came from China to Penang as a poor teenager. He heard that there may be tin in Ipoh, so he and 15 of his friends came to Ipoh where very soon he made enough money to buy his own tin mine; and the rest, as they say, is history. By 1893, he had 4 wives and 2 concubines. This was pretty normal for the time and this is also why these rich men decided they needed a place to get away from all those women (I guess it gave all the women a break from them too – a win, win).

In 1929 the small building that Leong Fee had originally donated was knocked down and the building we see today was constructed. Upstairs was the leisure and pleasure area. It was described to us as the Four Evils – Gambling, Opium, Prostitutes & Secret Societies. 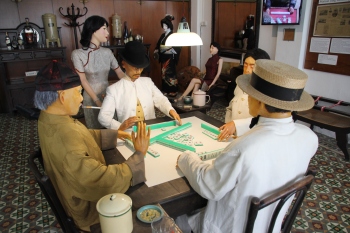 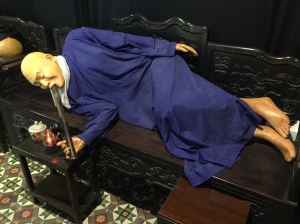 We had an explanation of the opium habit. I had always wondered why hard porcelain pillows were used by opium users, they never look that comfortable. It was so they could put their possessions into the hollow of the pillow and then rest their heads back and enjoy their opium state and not have to worry about their personal items being stolen. I’m not sure what would stop a sober thief from lifting the stoned opium users head up, stealing their worldly goods and placing the unaware head back on the now empty porcelain pillow, but there you go, one probably doesn’t think logically when stoned!

The secret societies were seen as one of the evils as they really left people with no choice. You were told to join; you were told to fight until your death, if necessary; you were told what to do, when to do it and when to stop! And none of this was negotiable. Possibly OK if you were high up in the society, but if you were a lowly participant it can’t have been that good for you.

The average Chinese mine worker earned $1 a day. But as they could only work on days when it was not raining, this meant they didn’t have a steady income. That said, $1 was a lot of money then, a meal would cost about 1 cent, so these men would have probably felt pretty flush. 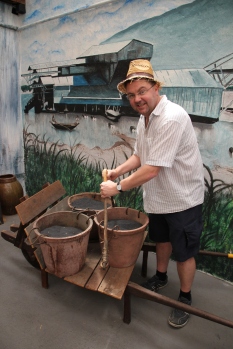 You would think to carry the tin around, from mine and around the market place to be sold, they would use tin buckets, but no! Tin buckets were too heavy, even when empty, so rubber buckets were used instead, handy that by this time rubber plantations had really taken off.

Out of interest the last dredger to be built in Malaysia was in 1985. It’s still working today, but has been moved to Indonesia.

We finished our day with a trip around the Hor Yan Hor Herbal museum where we learned about the medicinal uses of all sorts of plants. We finished with a cooling brew which was perfect for the hot afternoon.

On our drive back home, my husband and I pondered on all we had seen. For such a new nation, there is very old history to be proud of and I would like to thank both Elizabeth & Yeow for bringing it to life for us and organising such a full, interesting and fun packed day. I can’t wait for the next tour!