It was a rainy morning. Armed with raincoats and umbrellas, we gathered at the national museum around 7.45 am. All twenty who had registered for the trip, turned up despite the wet morning.

Sekinchan is a small town located in the state of Selangor in Malaysia, about 102km north of Kuala Lumpur and 28km from Kuala Selangor. In fact, Sekinchan is in the middle of the main rice-bowl area of Selangor, in Sabak Bernam district. It is one of the major rice producing areas in Malaysia.

The bus left around 8.30am. I was excited to see the much talked about paddy fields at Sekinchan. I had looked forward to going out of the city, soaking in the fresh air, and feasting my eyes on the acres of paddy fields. On the bus, Mona and Alvin, who put this trip together, told us what we could expect. We would be visiting the paddy gallery with a guided tour, then a mango orchard where we could purchase sweet juicy mangoes, have lunch, and then visit the Sekinchan Wishing Tree and a beach called Pantai Redang.

We were fortunate to learn more about our staple food as Steven Lim, a UNESCO qualified guide, shared his knowledge with us in the bus.

For more than 2,000 years, the highland rice fields of Ifugao have been planted on the contours of the mountains. The knowledge handed down from one generation to the next, the expression of sacred traditions, and a delicate social balance, have helped to create a landscape of great beauty that expresses the harmony between humankind and the environment.

The Ifugao Rice Terraces are the priceless contribution of Philippine ancestors to humanity, representing an enduring illustration of an ancient civilization that surmounted various challenges and setbacks posed by modernization.

Closer to home, is the unique adan rice or pade dari, popularly known as Bario Rice, found in the highlands of Ba’Kelalan, Long Semadoh, and Bario. It is one of the finest and best rice produced in the highlands of Sarawak. The rice has a soft texture with fine and elongated grains and produces a mild aroma and fantastic taste.

Commentary on Sekinchan by Mona Tan

Sekinchan in Chinese mean “village suitable for plantation” as the land and weather are suitable for farming of rice, fruits, and oil palm trees.

The birthplace of Sekinchan was actually at the main fishing area called Bagan back in the 1920s. The early inhabitants were almost all Teow Chew who were also fishermen. Sekinchan gradually grew in size due to population migration into this fertile land and it eventually developed into today’s scale.

In the year of 1953, in order to segregate the villagers from the Malayan Communist Party insurgents, villages were isolated, and hence formed the Site A, B, C, and Bagan. Sekinchan has a unique geographical environment; it is not only famous as a coastal rice planting area, it is also blessed with plenty of fishes. Hence, people named it “Land of Plenty”.

During the British colonial era, the Teow Chew villagers of coastal area called Sekinchan “Ang Mo Gang” as many British stayed there. The total population today is about 20,000 with 60% Chinese, 30% Malay, and 10% made up of other races. The main economic activities are agriculture and fishing. The total farming land for paddy and fruits is about 4,700 acres and this popular fishing village has more than 300 fishing trawlers!

All of us have been using USB flash drive or pendrive to store data or transfer information not realising that Pua Khein-Seng, who is from Sekinchan, is regarded locally as the “father of pendrive”, arguably one of the inventors of this USB flash drive. The multi-chip pendrive was first invented by M-Systems, an Israeli company, with a patent lodged in 1999. Pua’s claim rests on his being the first to incorporate the single-chip flash controller onto the USB.

Born and bred in Sekinchan, Pua received his undergraduate education in electrical control engineering at the National Chiao Tung University, Taiwan and has since then resided in Taiwan.

Sekinchan’s economy today is based on agriculture, where mechanised farming methods have been introduced to enable high yield of rice; tropical fruits especially mangoes; swiftlet farming; and manufacturing. A number of trendy hotels dot the town offering thematic experience with a touch of ‘zen’ or simply living in a comfort of a ‘container’ and B&B for the budget conscious!

We saw an endless horizon of green paddy fields; truly a sight to behold and no words could describe the breath-taking scenery! There are many inter-connecting roads even from the heart of the paddy fields, connecting small villages to the town. Along the way, you may stumble upon a water path or aqueduct, little bridges, and of course the paddy fields themselves. Sekinchan is also famed for migratory birds watching. Just to name a few, Peaceful Dove, Shorebirds, and the White-breasted Wood Swallow can be spotted here.

This place is also famous for its many fruit orchards with mangoes being one of the favourites. Sekinchan also upholds its reputation as a town with swiftlets nests or more commonly known in the food industry as birds’ nests. Chinese believe that birds’ nests are luxurious food that contains many health benefits. Many customised building structures, home of the swiftlets, sprouted up in the middle of paddy fields as this is a new thriving industry.

We arrived at the paddy gallery around 10am and started the gallery tour around 10.30am. We bought our entry tickets for Rm5.00 and it came with a complimentary packet of rice from the factory. We were brought into a presentation room where our guide, Miss Moon explained how Sekinchan paddy came about. There are four types of rice: glutinous, long grain, short grain, and fragrant rice. Their paddy seeds came from FELCRA and MARDI, both Government agriculture agencies. 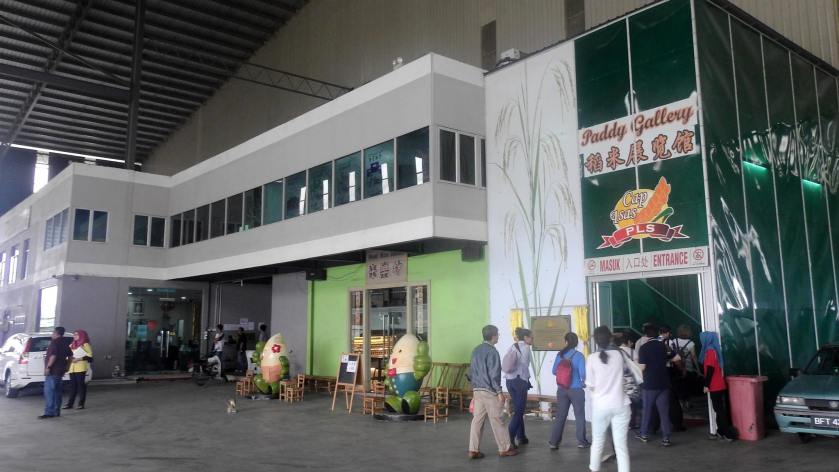 There are two plantings in a year, namely February and August. Transplanting is done by machine and this takes 2.5 hours. Water is drained out 3 weeks before harvesting. It takes 110 days before the paddy is ready for harvest. This means harvest time is May-June and November-December when the paddy fields turn honey gold.

In the olden days, it took 7 to 8 people to harvest 1.2 hectares of land within 2-3 days. With machine in the 1.2 hectares of land, transplanting takes only 2.5 hours to complete. Each 1.2 hectares of land produces 10 tons of rice before husking. Currently, their company, PLS Marketing (M) Sdn Bhd, only supplies to 99 Speedmart due to supply constraints. There are nine processes before the rice is sold to the market/public.

Step 1: The paddy husk is collected for reuse as the fuel for firing the boiler, to dry the paddy in the drier.

Step 2: Pressure from the heated boiler intensifies the drying process of the paddy.

Step 3: The dried paddy is then stored in the storage for cooling.

Step 4: The rice huller machine then removes the husk from the paddy through wind force to get the grain rice.

Step 6: The grain rice will be polished by the rice polisher machine where the rice kernel is also removed from the rice.

Step 7: With the application of the inconsistency principle, the rice-grading machine separates the whole and the broken rice.

Step 8: With the application of wind force, the destones machine then vibrate the rice where stones and broken rice are completely removed from the product.

Step 9: Once that is done, photo electronic technology is used to detect and then remove the black and immature rice completely to make it superior in quality.

After the paddy gallery, we visited a mango orchard called Mango King where huge sweet and juicy mangoes are sold. Almost everyone bought at least a bag home. They also sell prawn crackers & banana chips and we went back into the bus not empty handed. We stopped by a souvenir shop called ‘Ah Ma House’. It was a wooden house next to the paddy fields. Ah Ma House is a specialty cake and biscuit store in Sekinchan. The main product is Ah Ma Cake which sells traditional biscuit such as pineapple tarts, ‘kuih bangkit’, and ‘kuih kapit’ (Chinese love letters). This establishment received royal patronage on 22nd May 2017.

Later, we went to have a hearty seafood lunch at Guan Seng Long Restaurant. It was around noon and everyone was famished as we had an early start to the day. After lunch, we headed over to visit the Sekinchan Wishing Tree next to the Datuk Kong Temple.

As an aid to fisheries management and safety at sea, fishing vessels are appropriately marked for identification such as nationality of the vessels, irrespective of size and tonnage, to facilitate search and rescue operations if the need arises.

Julie Chang narrated to us the various licenses on the boat. Each vessel is marked according to its appropriate fishing zone usually in white lettering on black round background. Zone A is less than 10km; Zone B less than 25km; Zones C1 & C2 more than 25km and conducts overnight fishing, usually fully equipped with refrigeration facilities and polystyrene boxes.

The fishermen will venture into the seas in the wee hours around 4.00am returning back around 5.00pm with lots of fresh fishes, prawns, squids, crabs, and etc. In the evening, the whole Bagan springs back into a bustle of activities! Fishermen will be busy unloading their catch for the day to be categorized into types and sizes of fish before being sold to the middlemen or nearby seafood restaurants.

Pantai Redang Datuk Kong Temple Chinese temple has become popular among Chinese who come to worship the earth spirit, Datuk Kong, and to toss their wish up the adjacent Wishing Tree. This wooden shed temple is said to be over a hundred years old.

In the past few years, it has become a popular tourist destination particularly within the local Chinese community, after it appeared in the Hong Kong TVB drama ‘Outbound Love.’

The Wishing Tree next to the Datuk Kong temple attracts not only local Chinese but tourists from Hong Kong, China, and Taiwan as well. The beach area of Pantai Redang looks like a fiesta going on full swing, with people flying kites and enjoying food in various makeshift stalls.

Similar to the Pont des Arts Bridge in Paris, we have our very own Sekinchan Wishing Tree. It is said when you throw your ribbon high up into the air and it entangles with the tree, it will bring you good luck and your wishes come true. I watch in awe as some of our friends threw their red ribbons up into the air. It brought laughter and giggles. Some went up really high while some missed and caught a lower part of the trees.

We crossed over to the opposite side to walk on the beach. It was hot and we took a group photo near an abandoned fishing boat. We headed back to Kuala Lumpur around 2.30pm and reached the National Museum around 4.00pm.

It was another fun, enjoyable and informative trip to Sekinchan. I was really thankful to the organisers who recce the place prior to the trip and made this a wonderful day trip out of the city. 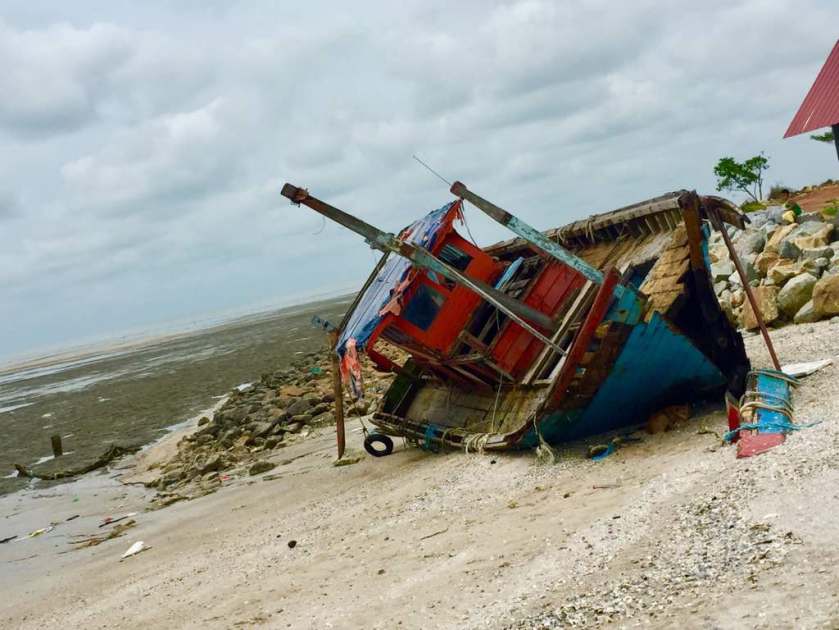