The newly refurbished Galley D looks brighter, roomier and less cluttered begging the assumption that many artefacts/exhibits have been removed from the gallery. But on closer inspection, quite a few exhibits have actually been added with the only obvious exclusion being the Mah Meri carving of “Spirit of Tiger in Chains”. This has been achieved through clever use of multi-media. For example, the display board showing information on the Prime Ministers of Malaysia has been removed and this information is now available on an interactive touch screen display.

Last week, on Tue, 17 Sep and on Sat, 21 Sep, Ms. Kiew from Muzium Negara took the Museum Volunteers on a tour of the gallery.  The first exhibit that greets the visitor is on early education in Malaysia and Kiew highlighted the salient points:

Another new addition to the gallery is the diorama on ‘pondok’ education. This was traditional education within the Malay community where small huts were set up in peoples’ homes or in the home of the religious teacher called Tok Guru. The pondok education focused on Islamic religious teachings.  Education and especially the pondok education resulted in a spread of ideas on nationalism and this leads very well into the exhibit on the opposite wall titled “Social Consciousness and the Beginning of Nationalism”, which is not a new exhibit.  The exhibit on “Writing and Malay Consciousness” is also not new but has been revamped and now has its own little corner within a glass partition. 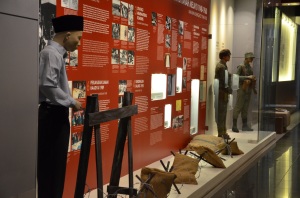 The exhibit on Malayan Emergency, too, has a new look. Ms Kiew pointed out that the British used the term ’emergency’ rather than ‘war’ because their insurers, Lloyd’s, only covered damages during riots or civil wars and not international wars. The exhibit includes a diorama of a home guard next to barbed wires. One of the British response to the communists was forced relocation of Malayans into ‘New Villages’ which were under continuous guard and surrounded by barbed wire and the Home Guards played an important role in ensuring the security of these new settlements.

This display shows the paraphernalia used during the first election that took place in 1955. 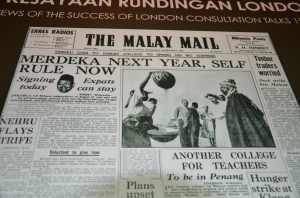 In 1956, the Chief Minister, Tunku Abdul Rahman, led a three week delegation to London to negotiate with the British on independence. The front page of 5 local newspapers reporting on the success of this mission is a new addition to the gallery.  The five newspapers are The Malay Mail (English daily featured on the left), The Straits Times (another English daily), Warta Negara (a Malay daily written in Jawi script), a Tamil daily (Tamil Nesan) and  a Chinese daily.

This diorama has been added to the gallery and it shows the raising of the Malayan flag at midnight of 30 Aug 1957 at the field in front of the Selangor Club; the honour of which was given to En. Tahir Abdul Majid and witnessed by over 10,000 people. Ms. Kiew pointed out that Tunku Abdul Rahman shouted the word ‘Merdeka’ seven times. Although it is unclear why he shouted it seven times, speculations abound and Choo Sim recounted an anecdote which says that Tunku was delayed in reaching the field for seven minutes.

Ms Kiew also mentioned that the original Merdeka Table is most likely housed at the ‘Memorial Pengisytiharan Kemerdekaan’ building in Melaka.

Display boards have been added that discuss the formation of Malaysia including the Indonesian confrontation, the Philippine claim on Sabah and Singapore’s separation from Malaysia. On the recent (Feb 2013) Sulu insurgency in Sabah, Sherry added that the late Sulu King, Sultan Jamalul Kiram II, did not have any male heirs and the current claimants are descendants of his relatives. The insurgents only represent about 4% of the claimants of the late Sultan and their claim is only for the coastal areas of Sabah from Kimanis to Semporna. Sherry also quipped that the insurgents’ intention was not to rule Sabah but to get monetary compensation from the Malaysian government.  She noted that they previously had been given compensation for the coastal areas and for the islands around Sabah. 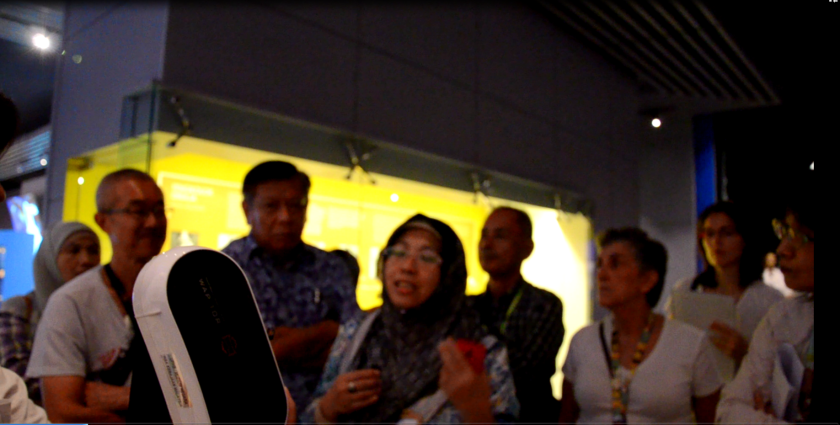 The section on constitutional monarchy has been expanded and now includes a running video. The section also includes an exhibit of a Speaker’s Chair which is a gift from the Commons House of Parliament of the UK as a token of friendship when Malaysia joined the Commonwealth Association. Choo Sim noted that the first Yang di-Pertuan Agong is Tuanku Abdul Rahman and the first Prime Minister is Tunku Abdul Rahman, which was confusing as they were both in their respective positions during the same period. It is for this reason that ‘Putra’ was added to Tunku’s name and he was known as Abdul Rahman Putra. Valli noted that Jalan Tuanku Abdul Rahman is named after the first Agong and not the prime minister as many people mistakenly think.

The information boards on Jalur Gemilang, Bunga Raya, National Anthem, National Crest and Rukun Negara have been replaced by lamp like displays; one for each item. 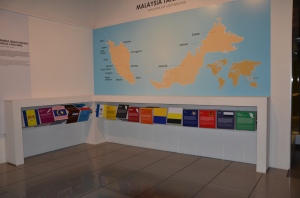 The national and state flags are displayed on cube boxes and visitors can rotate these to read the information behind a flag. Choo Sim noted that when the flags are lined up during an official ceremony, there is a procedure in place and the flags are not randomly placed. The flag of the state with the ruling Yang di-Pertuan Agong is first in line followed by state flags according to the seniority of their Sultan; seniority defined by the length of time served by the Sultan in the position. Flags of states with no sultans are placed after states with sultans.

There is also a display board providing information on 10 public buildings which were built in the early period of independence and these are the Subang Airport, Angkasapuri, Muzium Negara, National Mosque, Parliament, Merdeka Stadium, Bank Negara, Dewan Bahasa dan Pustaka, the Federal House and the General Hospital.

24 national icons have been identified and information on these are also placed on rotatable cube boxes. The picture below shows volunteers browsing through these.

The diorama on some of the festivals in Malaysia has been beautifully done and will attract a lot of interest from visitors.  The featured festivals are Hari Raya, Chinese New Year, Deepavali and the Harvest Festivals of the Iban and Bidayuh in Sarawak as well as the Kadazan-Dusun in Sabah.

Equally arresting is the glass cabinet next to this diorama that depict the minority groups in Malaysia.  The depicted groups are the Citty, Orang Asli, Thai, Serani, Sikhs and Peranakan.

For volunteers who missed Ms. Kiew’s walkthrough of the gallery, she will be giving a lecture on Gallery D to the new trainees sometime in October (both Tues and Sat sessions). Volunteers are welcome to join these session.  Do look out for the dates in your calendar invites.