Last Wed (16 Oct), Ashok, Karen and I headed to Melaka. Ashok was going there to get more information on the Chitty community for his article for the MV Coffee Table Book and Karen and I begged a ride and tagged along.

The Chitty are Tamil Peranakan who have been in Melaka since the time of the Melaka Sultanate. Similar to the Chinese Peranakan, the men married into Malay families and adopted Malay culture while retaining the Hindu religion and practices associated with the religion.

Read more about the Chitty community in the MV Coffee Table Book which will, hopefully, be published in the middle of next year.

After visiting the Chitty Museum and being given a good briefing on the Chitty community, we headed for the Sri Poyyatha Vinayaga Moorthy temple which was built in 1781 by the Chitty leader of the time and it has the distinction of being the oldest functioning Hindu temple in Malaysia. It is situated at a street informally known as “Harmony Street”.

The Kampung Kling Mosque was built in 1748 by Indian Muslim traders. It was originally a wooden structure which was re-built in brick in 1872 with the original design intact. It is a beautiful mosque with a very unique design – the adjective ‘eclectic’ would probably best describe it. The minaret looks like a pagoda and inside, Corinthian columns and a Victorian chandelier compete for attention with Chinese styled windows as well as Sumatran, Indian and Chinese carvings.

The Cheng Hoon Teng temple was built in 1645 making it the oldest functioning Chinese temple in Malaysia. It is a blend of Buddhism and Taoism with Kuan Yin being the main deity. The picture on the left shows part of the roof. My untutored eyes noticed nothing but Karen pointed out that broken pieces of ceramics have been included in the design.

Coincidentally, a few days before our trip, Effa had emailed Karen on an interesting place in Melaka – The Royal Press – and we went to check that out. The Royal Press is a printing press company that was set up in 1938 and 75 years later, the company is still in operation; printing mostly invoices and labels for long-standing customers.

This complicated looking machine is a Linotype. It was invented by a German, Ottmar Mergenthaler, and its introduction revolutionised the printing industry especially the publication of newspapers. The Royal Press purchased this machine in 1961 and it can still be used. Unfortunately though, none remain who have the knowledge to operate it and it is used as a showpiece in the semi-museum that The Royal Press has setup 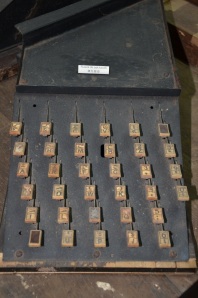 within its printing house. With this setup, not only are the paraphernalia of a bygone printing age on display, but visitors also get to see workers going about their daily job using some of the antiquated machinery still in use for production.

In the past, The Royal Press not only printed in Mandarin, but also in English, Tamil and Arabic. If you squint hard enough and look closely at the picture on the left, you would notice Jawi characters above the Roman alphabet on this ancient gizmo.

The Royal Press occupies an old colonial shop-house off Jonkers Street and the old world shutters and window carvings in the building charmingly reflect the character of the museum.

We were in Melaka. Cendol was must and we had this next to the Melaka River while imagining how The Battle must have been fought.

Melaka seems to have many gems little explored by the typical tourist. Do share if you know of any quaint places in Melaka with an interesting history.

One thought on “A day in Melaka”