This is an ongoing exhibition at Muzium Negara showcasing treasures from the ancient Dongson culture in Vietnam. The artefacts are on loan from Vietnam. Dongson is the name of a village in the Thanh-hoa Province in northern Vietnam and it was here that bronze artefacts dating to around 2000-2500 years ago were first discovered. The culture associated with this ancient bronze technology became known as the Dongson culture. 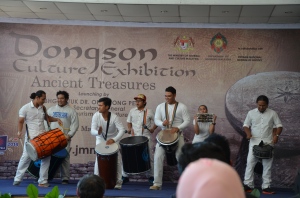 Drums rolled at the opening ceremony of the exhibition held on 11 March in a sterling performance that saw a number of different types of drums being beaten. The energy was palpable not only from the drumming which was brought to crescendo a number of times but also from the performers themselves who were obviously having a lot of fun on-stage.

This opening was, perhaps, appropriate as the most well-known object from the Dongson culture is the bronze drum and the star exhibit did not fail to awe. Known as the Sao Vang drum, this drum stands at 86 cm (2.82 feet) high with a diameter in the drumhead of 116 cm (3.81 feet). It is the biggest Dongson drum in the Vietnamese collection.

It is not only the size that awes but also the exquisite carvings on the surface. All Dongson drums, regardless of location, have very similar designs. A star at the centre of the tympanum is common to all drums and the rays of the star are all even-numbered. Drums found in Malaysia have either 10 or 12 rays. The star bulges out; perhaps to strengthen the place where it is struck the most. The flying heron is a common motif and researchers believe this to be the legendary “lac bird”, a symbol adopted by the ancient Vietnamese to represent diligence. Motifs on the drums provide valuable insight into the daily and the spiritual life of the Dongson society and the motifs include dancing, pounding rice, beating drums as well as sailing. Images of frogs are embedded at the edge of the tympanum and these possibly indicate a ritualistic ceremony to induce rain which is important to an agricultural society.

Dongson related artefacts have been found in locations other than Vietnam including in Southern China, Cambodia, Laos, Thailand, Burma, Malaysia, Indonesia and Philippines leading researchers to argue that these items were valued trade items. Did the Dongson culture also influence the cultures it came in contact with? The display boards at the exhibition show one such influence. The design of houses engraved on some of the drums is similar to the houses of the Toraja community in Sulawesi, Indonesia although it is uncertain to what extent other cultural elements had been absorbed. Carvings on a bronze drum found in the Yunnan Province in China indicate the Tien community had also absorbed this architectural style.

This is borne out by the display boards at the exhibition that discuss the skill of the people in making equipment and tools, personal accessories, weapons, houses as well as boats. However, the use of bronze drums is the most enduring element of their culture as testified by the number of communities in Southeast Asia and China that continue to use the drums till today. An example is the Karen community in Myanmar and researchers report that these Heger Type III drums are used by the community to assemble ancestor spirits as well as to take the spirit of the dead into the after-life.