Last Sunday (20th April 2014), a bunch of Museum Volunteers visited the Sri Kandaswamy Kovil at Scotts Road, Brickfields. We were hosted by Dr. Thilaga from the temple committee and Dato’ Jega who had helped arrange the trip.

The word ‘Kovil’ means temple and it is composed of two syllables: ‘ko’ meaning god or king and ‘vil’ meaning abode or residence. The Sri Kandaswamy Kovil is a 110 year old Sri Lankan Tamil temple. In Hinduism, Brahman is the Supreme Being; the formless god who takes three forms: Brahma as the creator, Vishnu as the preserver and Siva as the destroyer. So, Brahma, Vishnu and Siva are manifestations of Brahman in its different roles. In Saivism, Lord Shiva is revered as the Supreme Being and in a Saivite temple, Lord Shiva would be the principal deity. In Sri Kandaswamy, a Saivite temple, the residing deity is Sri Shakthi Vel Peruman, the divine spear of Lord Murugan, the second son of Lord Siva.

Dr. Thilaga’s stressed that images of Hindu deities and the rituals performed in Hinduism should be taken as symbols and not at face value. For example, Lord Murugan (the son of Lord Siva and the goddess Parvati) is pictured with six heads which represent the six attributes of wisdom, strength, (and I did not catch the rest). The six heads also represent the six directions: north, south, east, west, top, bottom indicating the all-pervading nature of god. His vehicle is the peacock indicating mastery over pride and vanity. One of his hands points downwards and another one points upwards representing fear and fearlessness respectively. Duality, such as this, can be seen represented in all Hindu deities. The exterior of a Hindu temple is very ornate. This reminds the devotee that there are many distractions in the material world and to leave these behind as he/she enters the temple. The ritual of bathing the deity is actually a symbolic process for the devotee to ‘wash away’ his/her emotions of jealousy, anger, greed, etc. 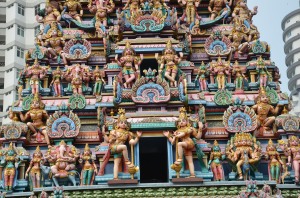 Sri Kandaswamy Kovil is a very orthodox temple and adheres rigidly to the ancient Saiva Agama scriptures which lay out the correct procedures to erect a temple, the form and placement of deities in the temple as well as how rituals in the temple are to be performed. Dr. Thilaga explained that the temple is shaped like the human body. The Sanctum sanctorum (that houses Sri Shakthi Vel Peruman) represents the head and the Gopuram (the main gateway of the temple) represents the feet. In the central portion, which represents the body, a representation of an enlightened soul, a representation of bondage and a huge golden flagpole have been placed. The flagpole is at the end of the ‘body’, i.e where the legs start. Saiva Siddhanta philosophy recognises three eternal entities: god, soul and bondage. Bondage of the soul in pursuit of materialism prevents it from knowing god.

The image of Sri Shakthi Vel Peruman in the temple is that of a ‘Vel’ which is loosely translated as spear.

Mythology behind the Vel: The goddess Parvati embodied her power in the Vel and presented it to Lord Murugan to assist in his fight against the asura Soorapadman. To escape Lord Murugan, Soorapadman turned himself into a mango tree but the Vel split the tree into half; one becoming a peacock and the other a rooster. The peacock became Lord Murugan’s vehicle and the rooster, the emblem on his flag. The Vel would, after battle, cleanse itself in the Ganges River before returning to its owner.

Symbology behind the Vel: it show the power of wisdom and that one must not only have in-depth knowledge of a subject but also that the knowledge must be broad (multi-disciplined). Sri Shakthi Vel Peruman is thus ‘one whose knowledge is deep, broad, and sharp’.