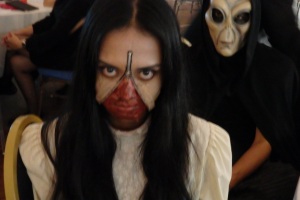 Saturday 1st November was not for the weak hearted as ghouls from every land and clime descended on Muzium DiRaja (Istana Lama) and started to walk in their masquerade. Yes, it was the annual dinner of the museum volunteers; a night filled with fun activities and ending with a Thriller dance choreographed by Mariana and performed by CK, Cze Yan, Effa, Karen, Kayla, Kuan Yong, and Mariana. You can catch the dance by clicking here.

The ghouls started arriving at 5pm but were stopped at their tracks with a quiz. Although termed a treasure hunt, this really was a straight forward quiz which could be answered by poking around Muzium DiRaja. Answers to the quiz can be found here. Marking was lenient but the only treasure hunt-like question (question 16) stumped everyone. Let’s discuss this question: Stinted madly but gave a crown. In which room can you find this? In treasure hunt parlance, “madly” is an anagram indicator. An anagram of “stinted” is “dentist” and a dentist gives a crown. So both parts of the question give “dentist”. Where can you find the dentist – at the Royal Clinic and this is the answer. Another question worth mentioning is: What are the different moods available to the Agung in his bedroom? If you went on the tour, the guide would have shown you the different moods – spring, summer, autumn, and winter. This is achieved via lights controlled by a panel on the wall. Overall, the ghouls did very well. Congrats to Sham and Ned for tying at the highest score.

As darkness fell across the land, the ghouls sat down to enjoy a spicy dinner catered from Pakeeza. But unknown to them, the Chief Ghoul was checking them out to see if they met the high standards set for scariness. Edwin, the little count Dracula, got the nod as did Harith, the British officer from days gone by.  The Pontianak Effa was lauded as the scariest female around. Approval was also given to Nisrin for the chilling photo booth backdrop and to Kinga for the grisly cake that the ghouls relished to the last bit.

Dinner was not a picnic as the ghouls had to toil during this meal and come up with terror inducing centerpieces; the prize for the best went to Hayley.  They also had to write stories using horror film titles – Robin and Ng Wei had the best. Let’s enjoy these two stories while reliving the night – another feather in the witch’s hat for Cze Yan. 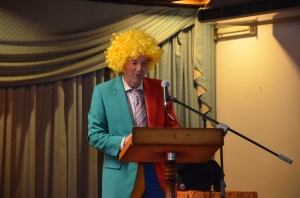 Martin wanted to borrow Jacob’s Ladder to Come and See The Birds and The Fly that were living on The Thing on the side of The Orphanage. Kwaidan had also told Martin to paint a picture of a Peeping Tom on The Old Dark House. “What colour?” Martin asked, using the same voice he had used in his Audition. “Deep Red”, Kwaidan replied. “That is a Suspiria colour,” Martin said, feeling a bit Braindead. So Martin climbed up the ladder, but as he climbed past a shot of the bloke who had cornflakes before killing The Abominable Dr Phibes, Henry: Portrait of a Serial Killer, he thought up a better plan then The Wicker Man had come up with. “Let’s Scare Jessica to Death”, he chuckled as The Fog started to close in. Martin was worried though. Jessica’s mother, Carrie, might not open the window to Let the Right One In. He got to the top of the ladder and The Mist had lifted. He stopped and looked into a window. Inside he saw Eyes Without a Face watching The Black Cat. He shivered and had a quick drink of Wolf Creek to settle his beating Angel Heart. The Vanishing mist allowed him to peer closer into the room without Repulsion. He looked at his watch, a Cronos Videodrome which had been in his Possession since that “Daughter of Darkness” incident. 28 days Later, it was still working and played Black Sabbath’s famously unpublished song Black Christmas Freaks in the Dead of Night. Maybe looking for Jessica wasn’t such a good idea. Polite Society would never forgive him. He climbed down the ladder and walked off to see Father Psycho, his favourite priest. He tapped on Father Psycho’s door using the Eraserhead knocker. Father Psycho was busy practicing his magic tricks, his best one being The Vanishing Ring. Father Psycho walked towards the door and turned The Shining door handle.  “Don’t Look Now”, he said to Martin. “The house is in a mess. It feels like I have had an Invasion of the Baby Snatchers”. “We are all Martyrs to our religion, Father”, replied Martin, entering the Halloween themed hallway. Rubbing his Jaws, which still ached after that Switchblade Romance with The Haunting woman Salo, Father Psycho looked at Martin. He was worried that Martin was spending too much time with The Freaks who were A Nightmare on Elm Street. “I’m sorry Father,” Martin said. “I wanted to Come and See you, not The Others. “I am sorry Martin, I am too busy today. I am doing a wedding. I am marrying Professor Frankenstein and The Bride of Frankenstein”. Saddened Martin left, still worrying about Jessica. “God Told Me To help her,” he thought. 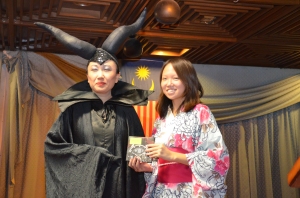 It’s a dark dark night. Two kids are staying in the house. Suddenly… “Shhh… Oh no! There’s something outside the window. The Thing is crying like old Rosemary’s Baby. Come and See, Martin,” said the Daughters of Darkness. “Come on, Ms. Darkness. There’s no such thing as ghosts. If so, I will be The Texas Chainsaw Massacre and God Told Me to marry the Bride of Frankenstein”, answered Martin. As soon as they looked out of the window, they heard something whispering, Don’t Look Now… It’s the Night of the Demon… Kill, Baby…Kill!” Then both of them saw a pair of Deep Red Eyes Without a Face. Martin and Ms. Darkness screamed. “Oh, come on… you two are always so dramatic…”, said Frankenstein and Dracula as they came in through the door. “Ha ha ha. We knew it was you. Happy Halloween! Let’s enjoy this Phantasm night.” Soon the Others joined in and started to dance like The Devil’s Backbone.