As with any of the museum volunteers trips out of KL, the day started early with over 30 volunteers and JMM staff members gathering at 6.30 a.m. for the estimated 4 hour journey to Sg Lembing. Despite a later than planned start; our bus arrived at Sg Lembing in good time, 10.30 a.m. MVs Zakaria and Jacky kindly took the lead roles as our guides on the coach, managing the group logistics with CK as well as entertaining us with anecdotes. Karen also kindly brought some educational DVDs for us to watch on the journey but of course, we mostly used the time to catch some extra forty winks!

At the Muzium Sg Lembing, the group was warmly welcomed by Puan Rebiah Mohd Yusof and her team. She gave the team an extensive introduction to the Muzium and history of mining in the town followed by a video screening. The video allowed visitors to hear direct accounts from the former miners and visualise the working conditions that they had to bear (read more in the account by Fui Min).

Immediately after this, MVs had an opportunity to quickly walk around the displays before we were ushered to board the bus in order to visit the Living Museum of Sungai Lembing run by the Kuantan Local Council before lunch. However, before leaving the museum, it was of course imperative we take a group photo to record the occasion. With everyone wanting a picture on their personal cameras and smartphones – it became the usual drawn out process of “wait…hold the pose… don’t forget that camera/phone…” before we could get on the bus!

At the Living Museum, MVs were charged a discounted rate for the visit with a further discount for senior citizens – this was one time people had no qualms owning up to their age! The group spent about an hour here exploring the tunnels – as described by Ursula – and generally testing out all the interactive displays. As members trickled out into the sunlight and gathered to wait for all the MVs to regroup, it was selfie time at the outdoor displays. Many agreed that this museum was most well displayed and offered an interesting experience for visitors.

As usual with Malaysian trips, meals are always one of the highlights and the simple buffet lunch organised by the JMM was a veritable feast for our senses! After this meal, MVs had the option to return to the Museum to check out the displays we had to rush through earlier in order to go to the Living Museum before lunch or walk down to the town centre. Walking down the main street, it was clear that Sungai Lembing was awakening as a tourist destination with number of homestays advertised and renovation works in progress.

Before the group bid adieu to this town, the group swarmed a local biscuit shop and practically cleared the shelves of the local delicacies – fried egg twists and coconut biscuits. Despite the rain, it was an uneventful drive back to the National Museum. Thank you again to the Focus Team for another successful programme!

The museum of Sungei Lembing, Pahang, is located up on a hill facing the Kenau River. This museum was once the tin mine’s General Manager’s living quarters. It was built in a mix of colonial and local architecture styles and suitable for living in our climate. Since 2001, it has been renovated and converted into a museum to showcase artefacts, mainly tools for Underground mining, for the public to view. Sungei Lembing is home to the only and largest Underground Tin Mine in Malaysia. 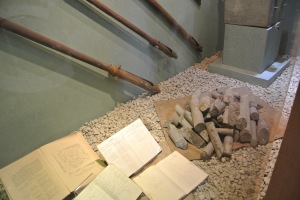 MVs got the opportunity to watch a video on the history of tin mining in the museum where we learnt a lot about the development of mining and heard personal accounts from the retired workers. This history of mining in the area started circa 1886, when the Sultan of Pahang granted a concession to the British company called Pahang Consolidated Company Limited (PCCL).

PCCL was run and managed by the British, who brought their expertise of underground mining from Cornwall, located at the Southern part of England. Many of their miners were locals and immigrants from China during the early days. The underground mining job was very dangerous. This was compensated through the higher wages paid to the miners.

There are many artifacts displayed at the Museum, which tells the history of the mine and the managing culture of the Colonial British. For example, the game of Cricket, which is the British number one sport, was shown in the photographs hanging on the walls. In addition, there were displays on the geology of soils found in the mine including the impact of the volcanic eruption on Jawa island in the 20th century. 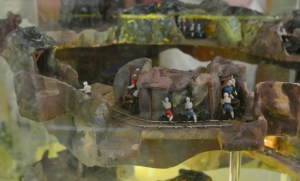 The Model of the Underground Tin Mine Tunnel shown and explained by Puan Rebiah, the curator, was very interesting. She informed MVs that there were more than 300 km of tunnels inside the mining cave. It had 23 levels and the deepest level is around 700meters deep. She also explained and clearly detailed the importance of safety procedures for the workers. This procedure had to be strictly followed in moving the miners down and out of the mining cave.

The other artifacts displayed are mainly showing the living standard of the General Manager, where colonial cutleries were shown, like silver spoon and butter knife, winding wall clock, bed side alarm clock for waking up early in the morning. Old manual typewriters with QWERTY keyboard can be seen as well as the telex machines for sending urgent messages back to England. These items displayed were of interest as an eye opener for younger visitors who may not have the chance to use such equipment with today’s modern technology.

Many of the former managers upon hearing of the conversion of the bungalow into a Museum, had come back to pay a visit to their former living quarters and had many stories to share with the museum staff. During the Japanese invasion of Malaya, this building was used as a Japanese Headquarters. One of the former managers revealed that one of the galleries was used as a lock-up room and prison.

This mine stopped operation in the year 1987 as PCCL was of the view that the operation was no longer economical with the high cost of operations and the low world market price for tin. From almost 100 years of operation, the Sungei Lembing underground mine had yielded more than 100,000 tonnes of tin ore!

We, as VM members, were very fortunate to have this opportunity with the JMM organizing such an educational field trip for our visit to Sungei Lembing.

The Visit to “The Great Tin Mines of Sungai Lembing”

This mine, located about 48 km from Kuantan, Pahang, is also known as the “El-Dorado” of the East. Our tour to the underground mine started with a short ride on an original train from the active days of the mine; we immediately felt like miners on their way to work.

After this nice start we had to continue our way by foot. Every step brought us deeper and deeper into the rocks. The visitor tunnel was high enough to walk, but still it was very narrow, very dark. Of course there were lights every 20m and at the side there were panels which explained the history of the mines.

After walking a while, we suddenly arrived at the “1 Million Cave”, a huge man-made cave. Here we could see different kinds of rocks, and a nice video display explained the history and the name of the cave. There was a time when illegal miners could make RM2,000 – RM3,000 per night! Altogether the amount was estimated of RM 1 Million.

In the labyrinth of the tunnels were also some interactive parts, e.g. visitors could try out some of the activities that would be carried out by the miners themselves. For instance, we could check our strength while trying to pull a block of tin – by the way tin is very heavy. I never understood physics in school but here I realized how the mechanical advantage of block and tackle really matters in the daily life of a worker.

At the end of the tunnel, steep stairs were waiting for us to go the “kiew”; how the miners called the lift. In the hall where the workers used to depart to their work was a lift-simulator with space for 6-8 workers. The miners had to go down up to 700 feet and had to work at temperatures around 42°C. In the older times there were no mobile phones. The miners had to rely on the man in charge of the lift and the only way of communication was a code of ringing a bell. Each ringing was a code which determines the distance to be moved and also the direction going up or down.

The visit of the underground mine was a great experience and there were a lot of interesting things to see and to try.