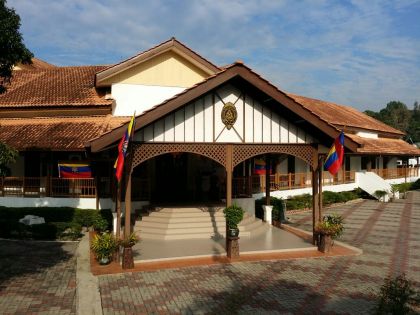 Our very first focus event for 2015 (on 29 January) was a visit to the Royal Malaysian Police Museum which is located near the National Mosque (Masjid Negara) and many other interesting tourist spots in KL city. We were very warmly welcomed by police officers who served us a hearty breakfast of local delights consisting of rice cooked in coconut milk (nasi lemak), curry puffs and local Malay cakes (kuih) with coffee/tea.

With filled tummies we started the museum tour by listening to a short briefing about the museum. We were informed that visits were free and they open everyday during normal working hours except on Mondays. On Fridays, it is closed from 12:30pm to 2:30 pm for Friday prayers. The museum consists of 3 galleries. Gallery A focused on the early history of the police force that spanned from the Malacca Sultanate period right up to the time of the Dutch colonisation. Gallery B exhibits were based on the period of the British rule. This covered the Straits Settlement, the Federated Malay States, the Unfederated Malay States plus Sarawak and Sabah. Gallery C’s exhibits were of the Malayan Emergency era and thereafter. We were then treated to a 7 minute video on the history of the Royal Malaysian Police Force.

Gallery A’s tour started with exhibits of the uniforms (females inclusive) that changed over time. Arms in the early days such as the keris, the Portugese helmet and sword, the Dutch pistols and guns and even a canon ball were on display. As we entered Gallery B our attention was brought to a lockup door that was curved which was how the lockup doors were those days. Items such as handcuffs, a very old typewriter, a gong (functioned as a siren) and an old Berkefeld water filter could be seen as we moved along. There were also exhibits of the different modes of transport used by the police such as the water buffalo, bicycles and motorbikes.

Various weaponry on display included those used by the police plus those used by captured criminals. These included those that were handmade. Uniforms used specifically for pomp and splendour, ceremonial events, and by the police band were also on display. We also discovered that the wives of the police force were entitled to become a member of a special police wives association but there isn’t any association for husbands of female police.

Due recognition was awarded to the heroes of the force. The highest of which is the Supreme Gallantry Award while the second highest is the Star of the Commander of Valour. Awardees of these awards were proudly displayed. Policemen who excelled in the field of sports were also included in the exhibits. 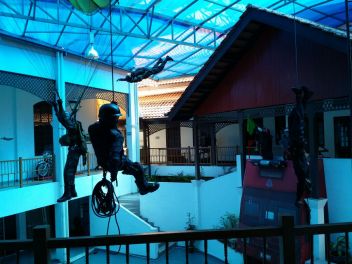 Gallery C started off with exhibits of the paraphernalia and contrabands of the Malayan Communist Party during the emergency. These included medical tools, some used for abortion, tools to make counterfeit money as well as tools to manufacture drugs. An item of interest included handkerchiefs with pornographic paintings that could be folded tiny enough to be easily hidden and passed on without being caught. In this gallery, there were also photographs of the police tattoo shows, performance/stunts accompanied with music that engage the public, a display of the identity cards used by members of the force plus all the ranks in the force. Finally, our tour ended with a 7 minute video on the emergency period between 1940s and 1960s.

Before we said our goodbyes, we extended our gratitude to our gracious police hosts who presented us a goody bag each consisting of the museum flyer and little museum souvenirs. It was indeed a morning well spent for all of us.