A visit to Sungai Batu excavation site is the menu for day 2 of our field trip to Lenggong and Bujang.  Oil Palm plantations whizzes past and excitement was already in the air as excavation sites started coming into view.  Sg Batu came into prominence in 2009 when excavation works unearthed evidence of the existence of a civilisation predating the Langkasuka Kingdom of the 2nd century in Kedah. Covering a four square kilometer, carbon dating done on the site suggest that civilisation could have existed as early as 50 BC. 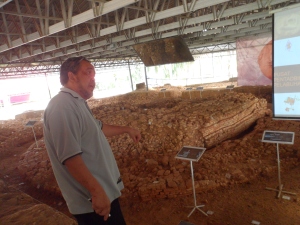 Upon arrival we were met by Associate Professor Mokhtar Saidin, Director of USM Global Archaeology Centre (PPAG).  According to Prof. Mokhtar, “We have proof of civilisations existing as early as 50 BC, but we do not rule out an earlier time period.  Therefore, the Sungai Batu site, based on the estimated timeline, appears to be the oldest civilisation in South East Asia”.

97 sites were identified and within these sites were discovered remnants of a ritual site which had a circular base with a square structure built on top of it. Strong evidence of early Hindu-Buddhist influences were evident with entrances aligned towards the East West direction facing Mount Jerai, the highest peak in Kedah at 1217m above sea level.

Iron smelting remnants were also found in abundance at these sites, pointing to strong evidence of trading and economic activities that were conducted here during those days. Not too far were discovered remnants of structures resembling its adminstrative functions with differing sizes of rooms, in total 12 buildings.  To further strengthen the theory of an iron smelting industry that could have existed back then, iron smelting furnaces were also discovered, much to archaeologists amazement, fully intact.

According to Prof. Mokhtar, the river could be very much closer that what it is today as some of the remaining brick structures resemble jetties, thereby confirming the theory that Sg Batu may have once been a prosperous iron smelting entrepot. Today a swamp and a tiny stream are the only indications of its past.

Why this civilisation disappeared could be attributed to a tsunami which hit around the 9th century, according to Professor Mokhtar. Underwater excavations were also conducted and ship wrecks were discovered.

As we walked through the sites, small iron remnants could be seen strewn all over the ground, along the path.  What looked like normal stones to untrained eyes like ours, is actually iron.

The most exciting activity for the day must be the hands-on experience of being an archaeologist.  Prof. Mokhtar introduced us to his team of students who are presently studying for their masters and PHDs at USM. At the site, we were introduced to archaeological terms like, site, trenches and quadrants. Once a site has been identified by archaeologists for excavation, it is  carved into trenches of 1 metre by 1 metre.  From this trench, it is further divided into 4 quadrants of 50 cm by 50 cm. Archaeologists would then meticulously work on one quadrant at a time, patiently and painstakingly recording their findings with every 10 cm downwards.  Students were given a specific site as their responsibility for their research on their papers.

So when Professor Mokhtar told us that we were given this hands-on opportunity to get down on our knees, boy! were we excited!  We could also pick our own trench! As no shoes were allowed in the trench, many of us sportingly kicked off our shoes, ready to “start work” as an “archaeologist” for a moment! Armed with the tools for the day, mallet, brush, scrapper, and a dust pan, we clumsily imitated the movements of archaeologists, brushing off dust, sand and what-have-you into the dustpan provided.  It was certainly no fun, if passion is not the underlying emotion of the task, I discovered.  Having gone through this back breaking experience, though short, gives us an appreciation of the work of archaeologists in uncovering our history. Kudos to them!

After lunch, we had the opportunity to try our hands at brick making, which was taken

up by only a handful of us.  Very much like making bread, clay is the main ingredient utitilised. It is then mixed with sand and paddy husk and kneaded into a dough and placed into the brick mould to be allowed to dry for at least 2 days. It is then baked in open fire of 600 degrees till reddish brown. Voila! there is your completed brick, your own masterpiece which you can display in your home.  A point to note is, it will take at least 2 weeks for this process to complete.  For that, you will have to make a return trip to Sungai Batu to collect it if you really want to. That’s something for the individual to ponder. 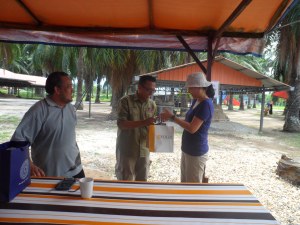 In appreciation of Professor Mokhtar and his team for their warm hospitality, Karen, our MV President presented tokens to them.

Continuing our archaeological trail, we visited Site 23. Artefacts discovered in the site includes Arabic lamp glass fragments. Carbon dating indicates that this site was there even before the arrival of Islam in this region.

Before we headed back to the hotel, we made a last stop along the way to one of the oldest mosque here in Kedah, located in the village of Pengakalan Kakap in the Kuala Muda District.  Known as the Masjid Lama Pengkalan Kakap, it was built around the 1800s. Located slightly below street level, it underwent successful conservation works by the Department of Museums and Antiquity in 1994.  Unfortunately this mosque is not in use anymore as there was a newer mosque constructed just next to it. 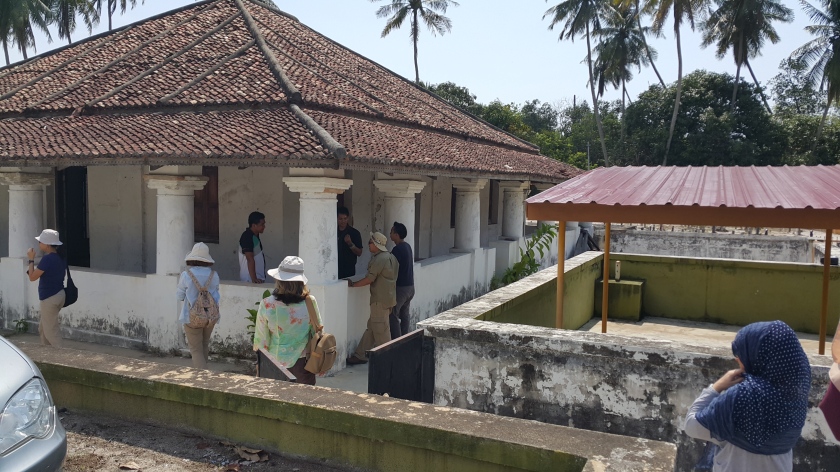 As we made our journey back to the hotel, flashing back on the day’s activities , it has indeed been an eye opening and informative day all rolled into one word—EDUCATIONAL!