It was music to my ears when I was informed that the planned visit to Istana Alam Shah was finally confirmed with approval given by the palace. This once in a lifetime golden privilege was well worth the hassle for me rearranging my schedule and shopping for a baju kurung just for the occasion. We were advised and reminded to adhere strictly to the dress code.

In order to ensure punctual arrival, we left early in the morning for the Selangor Royal Gallery, also known as Sultan Abdul Aziz Royal Gallery. We were warmly welcomed by Encik Munasar, general manager of the gallery, and his staff. This gallery was commissioned in 2002 by the current Selangor Sultan in honour of his late father, Sultan Salahuddin Abdul Aziz Shah, the eighth Sultan of Selangor and the eleventh King. The gallery displays collections of many photographs and items such as the crown jewels and royal regalia including the state sword. We were brought back in time as En. Munasar told us many fascinating stories as he guided us through the gallery. The collection in the gallery also includes royal state medals, gifts to the Sultan and royal family, the Sultan’s collection of personal items such as beautiful clocks and  watches, plus a scaled down model of Istana Mahkota Puri, the old Istana that was torn down to give way to the current Istana Alam Shah.

After taking a group photo at the gallery, we proceeded to the second phase and the highlight of our visit, i.e. Istana Alam Shah. Once again, we were warmly welcomed, this time by the palace staff. After taking our first group photo at the palace, we were ushered into a brightly lit hall where we were served refreshments. This was followed by more group photos and a visit to the royal banquet hall. Along the way, a prominent display of nobat (an ensemble of royal musical instruments) caught my eye. We were briefed on the seating positions of the Sultan and the royal family and their guests. We were also shown how crockery and cutlery were placed on the dining tables. Explanation was given on dining protocols as well.

Our next stop was the guests’ waiting room.  This room is furnished with beautiful sofa sets which are extremely comfortable. Of course, certain sofas were designated strictly for the royals but we were allowed to sit in those which are not. High ceilings with lovely patterns and adorned with glistening chandeliers along with the sofas gave a luxurious feel to the room. As we moved through the corridors from one room to another, we saw many photographs and paintings adorning the palace walls. Our attention was drawn to a painting of a famous photograph of the official declaration of independence. The original photograph had the Sultan of Perlis almost totally hidden behind Tunku Abdul Rahman (Malaysia’s Father of Independence) while this painting clearly depicted the Sultan of Perlis. 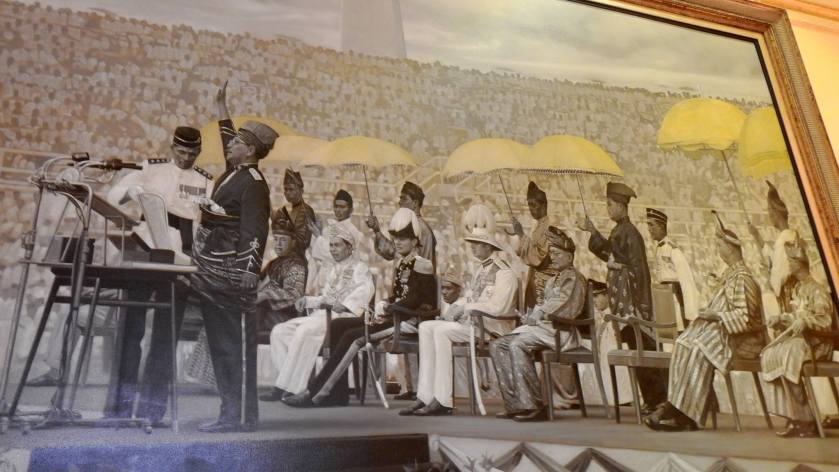 After a short walk away, we were ushered into a familiar looking room. Here, we were advised that photos were strictly not allowed to be taken. This is where the official royal installation of important positions including that of the Sultan, the crown prince, etc. takes place. This is also where state titles are officially conferred. The ceremonies include oath taking. The palace staff demonstrated protocols when one’s name is announced to receive recognition and award from the Sultan. We were told of a dedicated area specifically for traditional Malay musicians. It was fascinating to learn that these traditional music instruments have mystical powers and apparently, only selected people can play these instruments.

Following this, we were led upstairs where we discovered many more family photographs and personal possessions and collections displayed. Among these were included beautiful hand crafted pottery, sculptures, figurines, clocks, cabinets, and etc. There was also a collection of rifles, shotguns and pistols.

The mosque in the palace grounds became our next stop. It was not huge but not small either. Apart from the royals, palace staff and their families were allowed to use it. There was a room dedicated for cleaning and preparation of the remains of the deceased near the main prayer hall. This hall was airy and bright with lots of natural light pouring in.

From here, we hopped back on to our bus for a very short drive to our next stop; the Selangor Football museum. It is a small building in which memorabilia including photographs and newspaper articles relating to Selangor Football, past and present, are displayed. This brought me down memory lane as I recollected watching some of the football matches with my dad in my younger days.

We then proceeded to life size models of the old Bukit Timah railway station. An actual old train coach with properly maintained interior was also available for us ‘explore’. This was another nostalgic ‘journey’ back to the early railway days. Nearby, we saw a life size model of the Tanjung Pagar (Singapore) railway station main entrance and right beside this, our eyes  feasted on the beautifully landscaped Islam inspired garden, Taman Mahkota.

Our final stop was none other than the Royal Automobile Gallery. This houses the Sultan’s famously vast automobile collection, both vintage and modern, covering brands such as Rolls Royce, Jaguar, Mercedes, Aston Martin, Harley Davidson, and etc. We were shown vehicles used for both official and private functions. Some were personally driven by the Sultan himself. There was even, amongst others, a US army truck and an old British Royal Mail van on display. On the upper floor, we could even see vintage petrol pumps and air pumps. Indeed impressive and a well maintained collection.

What a day! What a privilege! This visit has been most memorable for all of us. We all went away happy, though tired, to have had this wonderful opportunity to see and feel what it is like living as a royal in Selangor – all with the warmth and hospitality of the wonderful palace staff.